Even today, The Beatles still remain one of the most popular pop music bands that ever took to the stage. This iconic band started from humble roots at the Cavern Club, a jazz-only club at the time it was started in Liverpool. It was from there that the pop phenomenon that was later to become The Beatles (previously known as The Quarrymen) took off after they were spotted. 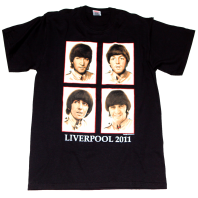 The original Cavern Club was destroyed later on after exchanging hands several times. A replica was rebuilt on three quarters of the original site. It is no wonder after the success they acquired that the popularity of one of the leading pop bands of the 20th Century still leaves on to this day. With great memories of the band still residing in the hearts of many pop music lovers, The Beatles memorabilia is still very much in demand.

They also include other items like armbands, various gift sets, membership shirts, Superbanana sculptures, baseball caps, anniversary books, travel mugs, tote bags, John Lennon style glass cases, playing card decks, original posters for The Beatles concerts and so on. Each of these items has the Carven club logo of the time and those that do not have The Beatles brand in some way.

For anyone who is interested in the Beatles clothing from the Cavern stores, ordering online is a good option especially for those who do not live within the UK. Once that has been done and the merchandise paid for, delivery will be done via shipping where applicable. This is highly convenient for those who are fans of the legendary pop group but leave too far to purchase the items in person.

The Beatles memorabilia is actually quite affordable with prices ranging from as low as £2 to the affordable price of £30 for most of the items. Since the delivery and shipping costs are also very affordable, the memorabilia does provide value for money. In addition, the payment options available are very secure and hassle free. It never hurts to obtain something to remember the popular pop band by.