Meghan Markle is on everyone’s lips. A great defender of the rights of women, in solidarity, a successful actress … she has won the love and respect of the whole world! The British love Meghan Markle because it has brought a bit of fresh air to the monarchy.

That renovating and changing character with which she has arrived at Kensington Palace is also appreciated in her wardrobe. The actress, now promised by Prince Harry, meets most of the formal rules of clothing of the British Royal House, but all her looks incorporate little touches of rebellion that make them unique. We have collected 10 great Meghan Markle looks that show her great taste when she comes to choosing clothes. 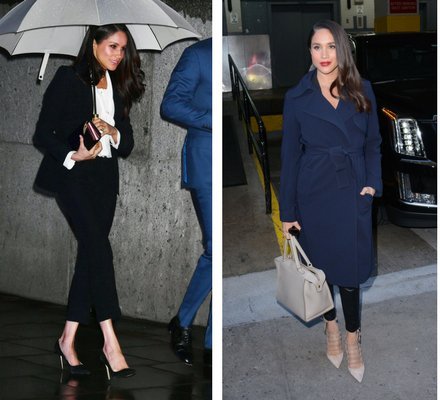 Do not miss the top 10 of the best looks of the fiancee of Prince Harry of England.

We started this ranking with an elegant blue shorts sky suit that has accompanied some top-end shoes and silver-colored heels. Under the jacket, a lightweight white T-shirt with unbuttoned top buttons, a detail that shows how the style has changed after entering the royal family. Accompanying the look, a bright red handbag and matching sunglasses that she wears in her hand.

The daily look of Meghan Markle

On this occasion, the actress has chosen a coat up to the knees on tight pants that could be leather. We love beige shoes with ribbed bows. Once again, she drops a mane worked on one side of the head. Close this style with a red lipstick.

Meghan Markle chose this unblemished white coat in the announcement of her engagement to Prince Harry. She knew that everyone was going to be attentive to her look and did not disappoint with her styling. In fact, the web on which this cross-over coat was sold collapsed because of the number of people who wanted to have one like it. 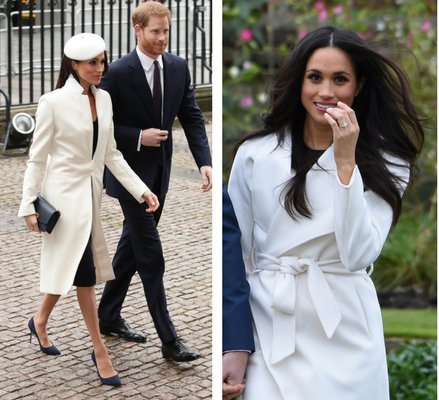 This style is a true reflection of the taste of Meghan Markle wearing: a black jacket suit with a white shirt. The small black clutch with pale pink lining and gold chain gives an even more glamorous look that could have gone unnoticed. There is no better way to complete this look with elegant black stilettos with high heels.

Meghan Markle usually bet on neutral colors such as white, black or pastel colors. But we also love this navy blue fur coat. The former actress knows that the coats that are knotted with a belt feel good and she does not hesitate to use them. Under the coat, a lovely turtleneck sweater.

The most elegant look of Meghan Markle

Once again, the young woman has chosen a wrap flat beige color. We are left with the round handbag to match the headdress and gloves. She chose this elegant style on an important day: the first time she would appear with Kate Middleton, one of the most wanted photos.

Meghan Markle was keeping one of her most special and glamorous dresses for an important occasion. And finally, she took it out on the first official photos with his fiance Prince Harry. Do you like this long skirt with embellishments and semi-transparent top with small embroidered leaves? 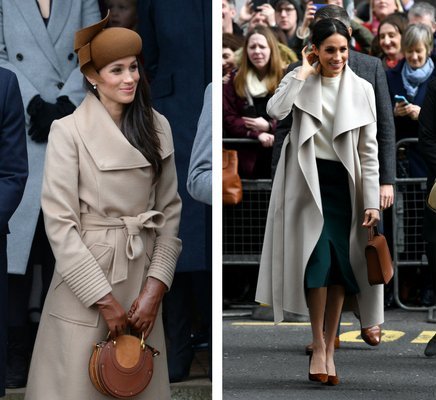 As it could not be otherwise, Meghan Markle put on this tartan print coat for one of her official trips to Scotland. It has been one of her most admired looks, so the coat and other clothes of the same style soon sold out in stores.

The white headdress for a special occasion

White favors Meghan Markle a lot, so she chose it for her first official meeting with Queen Elizabeth II. But what we liked most about this look is the beret flanked as a touch by its point of distinction and rebellion that brought the sobriety of an act like this.

The winning look of Meghan Markle

And among all the looks of Meghan Markle during her public appearances, we were left with this green tube skirt, a garment that we were not used to, a white knit sweater, beige wrap coat and bag and shoes in brown camel. We just love it!

What is your favorite Meghan Markle look?

2018-07-10
Previous Post: What to wear on rainy days?
Next Post: How to Safely Buy High-end Fashion Brand Online