Sweden is famous for many things. Beautiful women and elk meat are just two of the many things the skandinavian country is known for. The most recent characteristic is the fashion sense the residents of Swedens capital Stockholm seem to ooze. 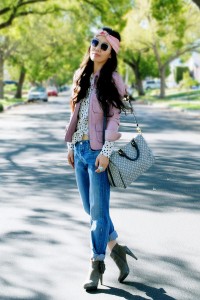 Almost every major style magazine has already published a story on Stockholm’s street chic, such as Elle or Harpers Bazaar.

Swedish women, and also men, seem to love vintage pieces and are more than happy to try out new things when it comes to fashion and styling. The combination of boyfriend jeans with really feminine high heels and manly accessories such as IWC vintage watches or an old Fedora can be often seen among the fashionable crowd in the capital. The Swedish manage to do so without looking dressed up, a trait many others seem to struggle with.

City of style and taste
While the common correlation is obviously the vintage element, the styles itself differ. The biggest trend this past summer was color blocking, seen in every big city around the globe, though the color scheme differentiated. While most people chose bright colors, fashion lovers in Stockholm wore another range of color: black, white and grey. Layered asymmetrical looks were also quite big this summer.

The color of choice was black – obviously. But fashion is only one aspect of Sweden’s love for design. While strolling through the city center, one can’t escape the numerous vintage furniture stores. It doesn’t take long to realize that Stockholm is obsessed with design and the pretty things in life. That reflects on fashion, interior design and also food.

The Swedish capital is exceptionally stylish. One thing to get Stockholmers chatting about their sense of style is a cup of coffee with a nice slice of cake. When it comes to fashion, many Swedish style blogs serve as inspiration for people all around the world. And why not, since they obviously know what they are doing.